82-02 Camaro/Firebird NEW Magnum-F 6-Speed Transmission ONLY, For LSX Engines ONLY 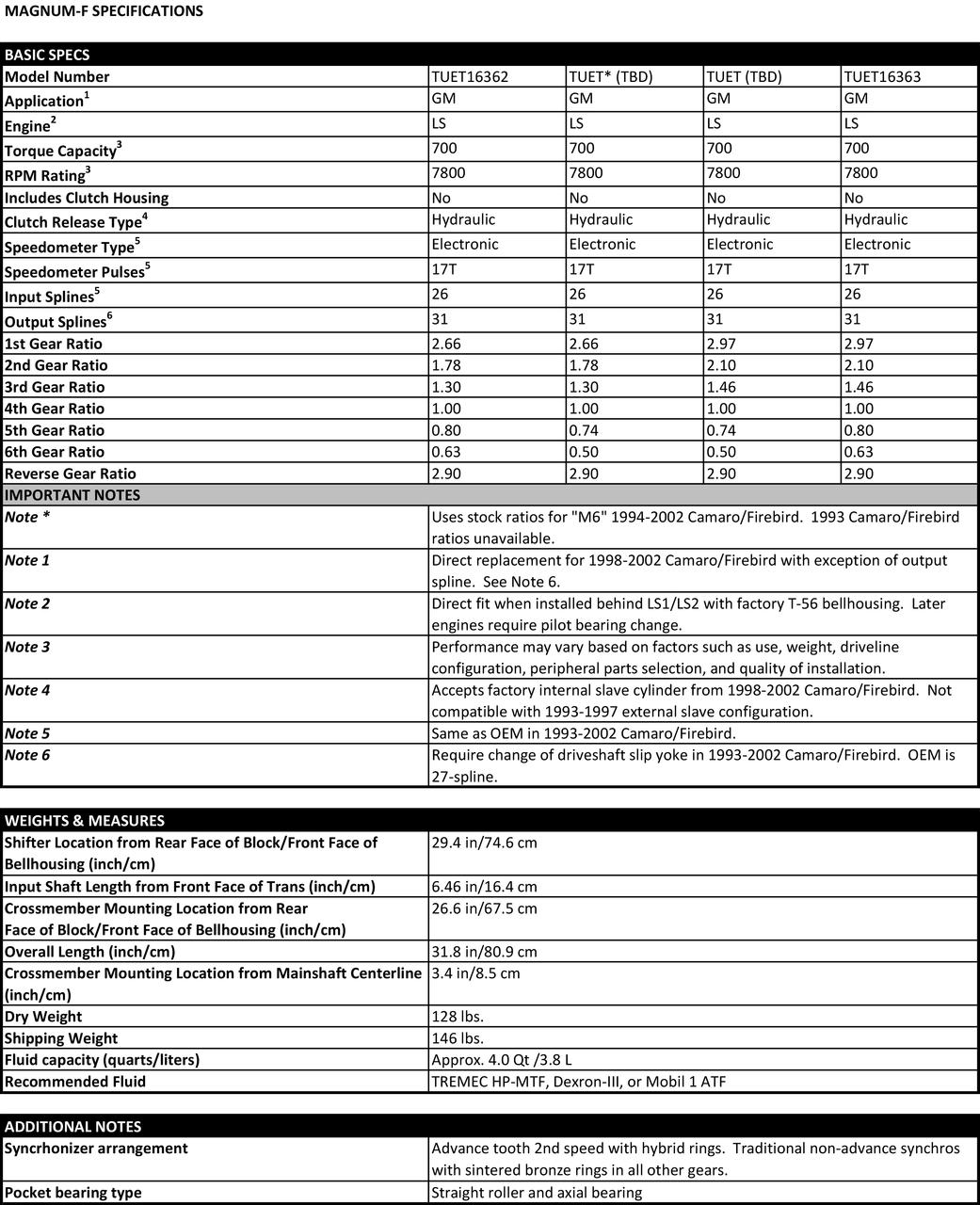 NOW AVAILABLE Magnum T56 6-speed transmission available that are direct bolt in for 1982-2002 f-bodies with an LSX engine or LSX swap.

Can be used in 82-97 Camaro/Firebird doing a LSx Engine swap / LSx T56 Conversion.

Consider upgrading to the Hawks Short Throw Shifter, Save $40.00 and we will pre-install it before it leaves.

Require change of driveshaft slip yoke in 1993-2002 Camaro/Firebird. OEM is 27-spline. This is NOT included unless you select it in options.

TREMEC releases the Magnum-F™ 6-speed for fourth-generation Camaros and Firebirds.

Born in the vacuum created by the release of the original T-56 Magnum (now known simply as ‘Magnum’) back in 2009, the Magnum-F fills a longstanding void in the overall Magnum line with regard to shifter locations; addressing not only LS1-powered ‘98-02 F-bodies, but several other applications that utilize a similar shifter position.  Beneficiaries include third-generation F-bodies, LT1-powered fourth-gens, LS-swapped late models of all varieties, and sport compact applications such as A80 Supras, FD RX-7s, and more!  Where the original Magnum shifter locations may prove too far forward, and the extended length Magnum XL’s too far back, the Magnum-F’s in-between position often proves to be just right.

Inside, the Magnum-F benefits from the same durable components found in many of today’s hardest hitting OEM muscle & sports cars.  Over the T-56, the Magnum-F boast increased face-width on all gears, a robust combination of double and triple cone synchronizers, enhanced webbing in the main case, provisions for a cooler circuit and more!  TREMEC also took the opportunity to upgrade the shifter to an isolator type unit, like that found on its Magnum XL.  The shifter reduces in-cabin noise and vibrations while at the same time providing the precise and communicative shift feel that all Magnums are known for.  And like all TREMEC aftermarket transmissions, the Magnum-F is made from 100% brand-new OEM-quality content.